Hopeless is a FPS (First person shooter) developed using Unity. Hopeless takes inspiration from games like Half-Life, Battlefield and Left 4 dead. It is a multiplayer game where you and other players will play as humans or infected. This is not a post-apocalypse game, this is an apocalypse game. The end of humankind is a matter of time.

What will you find in Hopeless?
- Dedicated servers for many players (64 approx)
- Two very different sides: humans and infected.
- Very advanced narrative for a multiplayer. Hopeless scenarios will lead you through unforgettable experiences.
- Greater freedom of choice, players can choose to ignore mission objectives. Run away, dig, place barricades or go out exploring...
- Infected have a wide range of classes and opportunities to ambush and assimilate humans. Extra speed, jumps, strength, toughness, regeneration, acids,
expulsion of gases ...
- Humans will have spectacular weapons like flamethrowers, sentry guns or explosives
to unleash chaos throughout the map, aside from enjoying specialized classes such as medical, support, special forces, engineer ...
- The infected are able to make a certain area dark, so that humans need to use their flashlights which diminishes their response capabilities.
- Spectacular sound that will immerse the player in the ambience. Humans will be surrounded by the sound of shouts, screams and footsteps getting closer and closer...
- Secret labs, cities, prisons, dams ... Many and varied levels for the enjoyment of the players.
- A bunch of new skills for players ... Drag your fallen comrades to a medic. Seal doors to hinder the progress of the infection. Escort civilian convoys to the extraction point. Make sure the President safely evacuates the White House.

A mutagen of undetermined origin  (a conglomerate of several different pathogens) has been released with the melting of the Siberian permafrost in Iultinskiy rayon, Chukotskiy.  contaminating the water and causing terrible mutations in a few days. The great nations of the world have sent their troops in an attempt to control the outbreak. But in doing so, soldiers are being exposed to the pathogens, becoming infected and having to be executed by their own brothers in arms. The situation is deteriorating exponentially.

The pathogen is latent in the ice, waiting for more favorable living conditions. Once it is released, it will infect almost any living thing. At first it is dormant as it spreads through the hosts. When it has assimilated its host's genetic material, the pathogen is re-activated.

That way, the infection can spread easily and silently through in the local fauna while collecting the DNA information it needs.  Once the reaction has been triggered, it causes the host to suffer a mutation. These transformations make the infected highly aggressive towards non-infected, as well as highly sensitive to the hormones secreted by other infected, so that they know precisely where their team members are at all times.

The infection is best and most quickly transmitted through open wounds. It’s contagious by fluids, ingestion and even breath if the concentration is sufficiently high. The pathogen can brutally alter the host to the point where it can even revive a dead creature if it’s not too wounded or mutilated.

The nanorobots base parasitic biomass, and they are capable of forming stem cells to specialize them later. Developing an equivalent to a "brain" nervous system structure. Learning, making new decisions and be able to assimilate the DNA that the nano robots analyzed and procesed for the "brain". This intelligent organic mass introduce  patterns in DNA to alter their infected even to contact them (via hormonal or radio).

On this way they get all DNA from all living forms, later they process their info and select fragments for gets better mutations and infected living things. Also, subsequently if there are enough biomass it can create new living forms like mobile parasites (Banes). Banes are seeking new victims to inoculate and mutate for take advantage of its qualities. For this they need to insert large amount of nano robots, accelerating substances and nutrients for proper assimilation in the body.
If an infected infects you, the mutation process starts but will be slow and limited, if not helped by Banes (mobile parasites).

There are several kinds of nanorobots:
Some of them collect DNA, others analyze it, others store it, build new chains, others insert it, others transmit information to communicate with one another. When they encounter a new species for the first time, they analyze its DNA and transmit it to the corresponding biomass center. Once the information is processed, they creat a group of nanorobots for that particular specimen, i.e. human. They create a virus that debilitates the immune system to decrease the host's resistance, as well as bacteria that metabolize the substances necessary for the robots to carry out the mutation and asimilation, and an enormous collective of nanorobots with specific functions to attack the cells and mutate the human into a zombie. 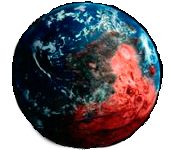 The purpose of the pathogen is to assimilate the vast majority of terrestrial fauna and alter the atmosphere to more favorable conditions for newcomers (unknown). The pathogen is a terraformer.

Human science eventually will discover how to mitigate the pathogenic mechanism which is used to disable our immune system and facilitate infection. With this enhancement, individuals subjected to limited exposure to infection may contain mutagenic effects. But a heavy exposure, serious injuries, or death will enable and will accelerate the mutation.

The pathogen is a conglomeration of nano robots that alter the carrier to create a mutant. The complexity of their behavior suggests that  unrelated to the earth.

Humankind will inevitably lose territories against the pathogen. With great efforts in advanced research the species will get some amount of control against the pathogen. But even then there is little to no chance of victory. Humanity will search for easily defensible terrains in which to keep the last survivors safe and store the resources that will enable us to continue fighting the mutants.
Meanwhile, the pathogen is day by day taking more and more of our lands and inexorably gathering more resources of its own with which to grow even more and deadlier creatures to ensure the end of the reign of humanity on this planet.